For someone new, Greek mythology is a vast and sometimes difficult world to understand.

Hopefully this video simplifies how the world and the gods were created and gives you a base of knowledge to work from.

In the beginning, there was only Chaos, the gaping void. Then, either on their own or from the formless void, sprang three other primordial deities: Gaea (the Earth), Tartarus (the underworld) and Eros (Love).

Once Love was there, Gaea and Chaos – two female deities – were able to procreate and shape all known and unknown in the universe.

Chaos gave birth to Erebus (Darkness) and Nyx (Night). Erebus slept with his sister Nyx, and from this union Aether, the bright upper air, and Hemera, the Day, emerged.

Subsequently, feared by all but her brother, Night single-handedly fashioned a family of haunting forces.

During this time, Gaea gave birth to Uranus, the starry sky. Uranus became Gaea’s husband, surrounding her on all sides. Together they produced three groups of children: the three one-eyed Cyclopes, the three Hundred-Handed Hecatoncheires, and the twelve Titans.

However, Uranus was a cruel husband and an even crueler father. He hated his children and did not want to allow them to see the light of day.

So he imprisoned them in the hidden places of the earth, the belly of Gaea.

This angered Gaea and she plotted with her sons against Uranus. She made a harp, a large diamond sickle, and tried to induce her children to attack Uranus.

Everyone was too scared, except the youngest of the Titans, Cronos.

Gaia and Cronus ambush Uranus. As he prepared to sleep with Gaia, Cronus castrated him with the sickle, throwing his severed genitalia into the ocean.

It is not known what happened to Uranus thereafter; he died, or withdrew from the earth, or went into exile in Italy.

From the blood that was shed on the earth because of its castration, emerged the Giants, the Meliae (the Ash Nymphs) and the Erinyes (the Furies). From the sea foam that occurred when her genitals fell into the ocean, was born Aphrodite, the goddess of beauty. 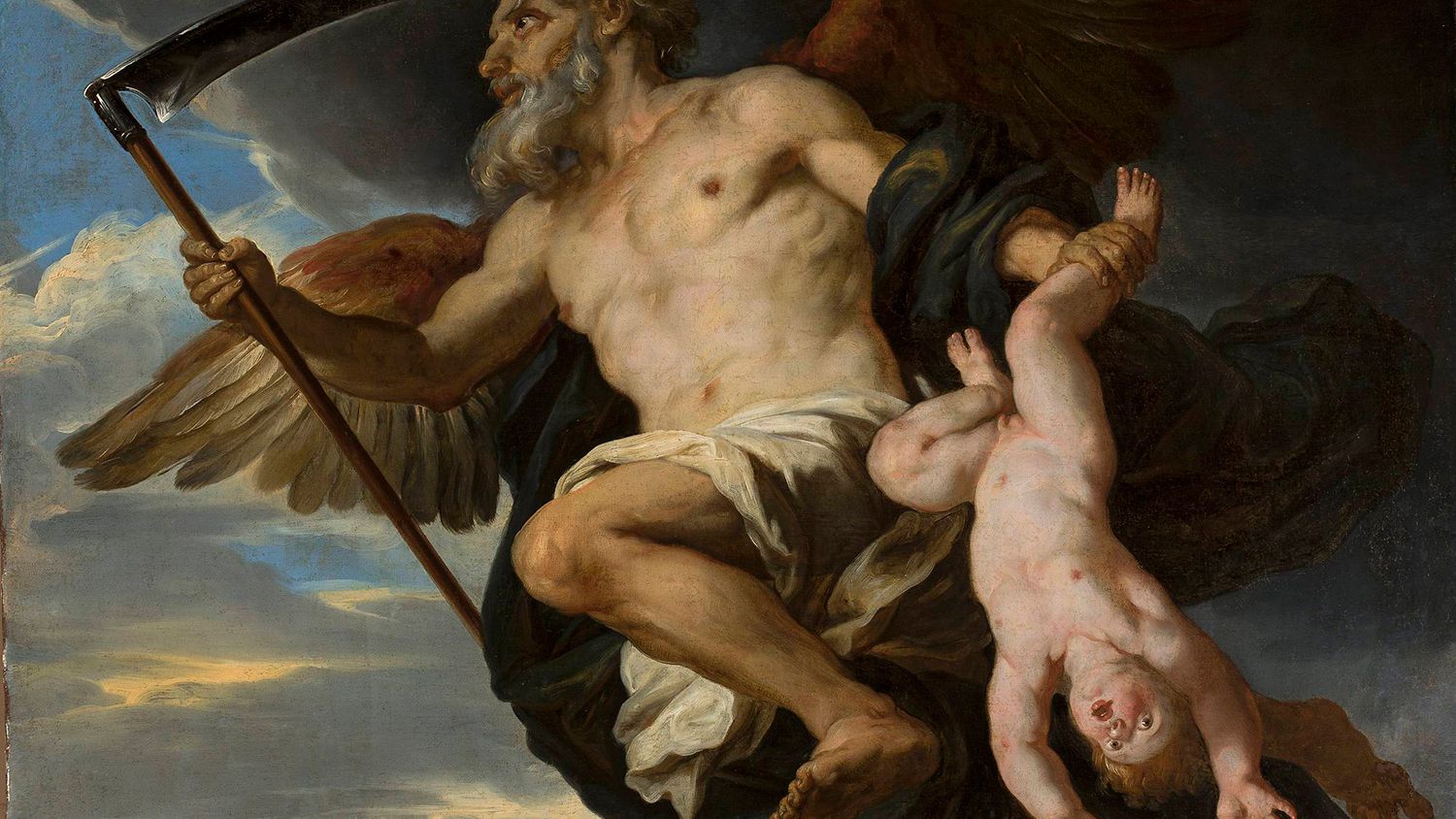 Cronos became the next ruler. He imprisoned the Cyclopes and the Hecatoncheiras in Tartarus and charged the dragon Campe to guard them.

He married his sister, the Titaness Rhea, who bore him five children. However, both Gaea and Uranus had prophesied that Kronos would eventually be overthrown by one of his sons.

Much like his father, Cronus abused his children, devouring each one upon birth. Rhea was upset by Kronos’ treatment of her children and, like Gaea before him, plotted against her husband.

On her mother’s advice, when she was about to give birth to her sixth child, Rhea hid in Crete, leaving the newborn child to be raised by the island’s nymphs.

To conceal her act, she wrapped a stone in swaddling clothes and passed it off as the supposed baby to Cronus, who, unaware of her intentions, swallowed it again.

The return of Zeus

The child was Zeus.

Raised by the nymphs Adrasteia and Ida, and the goat Amalthea, he soon grew into a handsome young man in a cave on Cretan Mount Ida. When the time came, he left Crete to ask his future wife, the Titaness Metis (Wisdom), for advice on how to defeat Cronus.

She responded by preparing a drink indistinguishable from Kronos’ favorite wine but destined to make him vomit for ages. Zeus disguised himself as the cupbearer of the gods and, after a while, managed to slip Metis’s drink to Cronus.

The plan worked perfectly: Cronos began to vomit and knocked down the five siblings of Zeus, but only after throwing the stone. Called Omphalos, or the navel, the stone was later erected in Delphi by two eagles sent by Zeus to meet at the center of the world.

However, Cronus was still in control – and had yet to be defeated.

He was too old to protect himself from the attacks of his offspring, but he sought help from the loyal Titans, who also feared the new generation of gods.

This led to a decade-long war between the Titans and the Olympians, which generations now remember as the Titanomachy. Atlas became the leader of the Titans and led his armies to many victories. At one point, it even looked like Zeus would be defeated.

However, on Gaea’s advice, he traveled to Tartarus and freed the Cyclopes and the Hecatoncheires.

In gratitude, the Cyclopes provided Zeus with his signature thunderbolt; they also made a trident for Poseidon and a helmet of invisibility for Hades. The tables had turned. 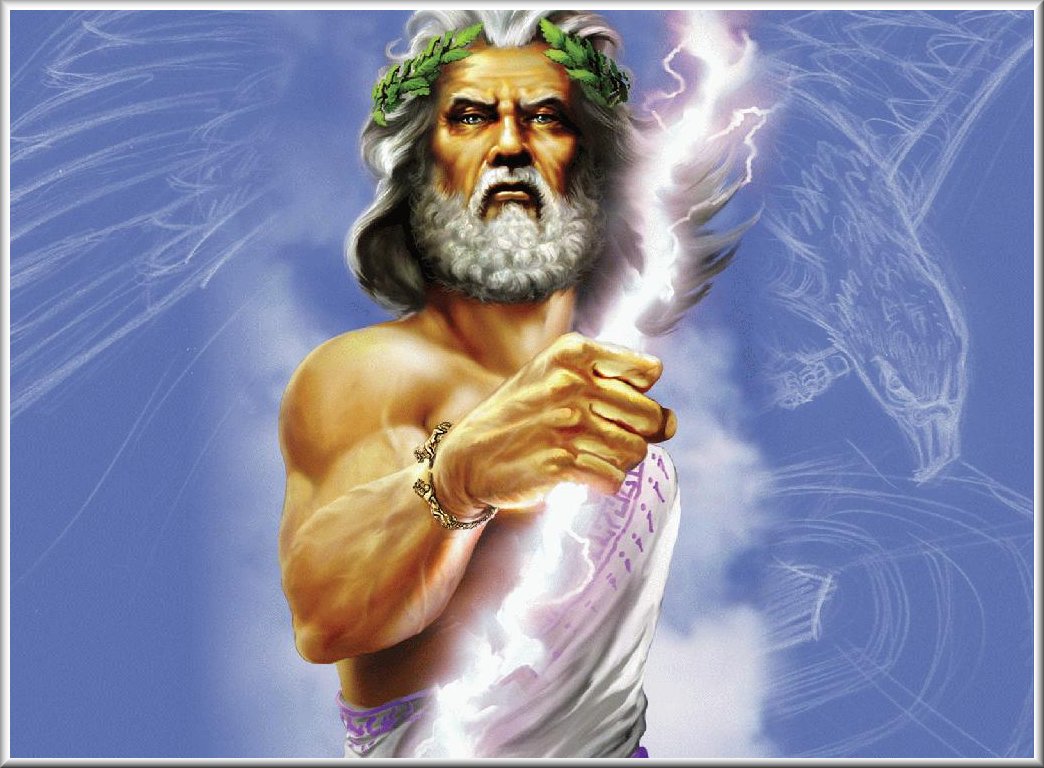 However, like so many times before, the ultimate victory wouldn’t be the result of brute force, but would happen through a cunning little trick, possibly devised by Prometheus, who had deserted the Titan army beforehand.

At the right time, Zeus withdrew his forces, luring the Titans into the trap of the Hecatoncheires.

The Hundred Hands began raining down hundreds of boulders, with such fury that the Titans thought the mountains were falling on them.

They fled and Zeus could finally consider himself the king of the universe.

Zeus exiled the Titans who had fought him in Tartarus. He did, however, make an exception with Atlas: being the leader of the opposing force, he was punished for holding the universe on his shoulders.

Zeus’ power would be challenged a few times thereafter. Just after the Titanomachy, her grandmother Gaea, outraged by the imprisonment of her children, bore her last child, the monstrous Typhon.

He was so fearsome that most of the gods fled the second they saw him; however, Zeus did not hesitate. He faced the monster and using the power of his lightning he was able to defeat it.

Typhon was later buried under Mount Etna in Sicily.

They say you can still hear it growling under the volcano. And that one day in the distant future, he will return to challenge Zeus once more.

READ MORE: Cyrene: the Greek city of philosophy and beauty in Libya.