The History of Polaroid Photography

The invention of Polaroid photography began in 1948 with scientist Edwin Land after his daughter asked him why she couldn’t immediately see a photo he took of her. This led him to develop the first Polaroid camera. Polaroid has been leading the way for decades, innovating and making better films and cameras. Although the 80s were not good for the company. Declining sales and low interest in their product led Polaroid to announce that they would no longer produce films. Fast forward to 2008, Impossible Project helped spark a renewed love for analog photography by producing Polaroid compatible film using their own Polaroid formulation and machinery. Impossible Project eventually purchased Polaroid and took on its name, working to create new formats and cameras under the Polaroid name.

Since Polaroid is the original of instant photography, they have produced many cameras over the decades. You can find many different cameras at garage sales or flea markets. For modern versions of the instant camera, there are a few more players. The main instant camera and film producer outside of Polaroid is Fujifilm, which has a full line of Instax cameras and film. For example, one of the most popular modern cameras is the Fujifilm Instax Mini 11.

Another notable new player in instant photography is MiNT, which also produces attachments and accessories for instant cameras. The company also makes instant cameras designed to give the photographer more control over their shots, such as the Instantkon RF70. 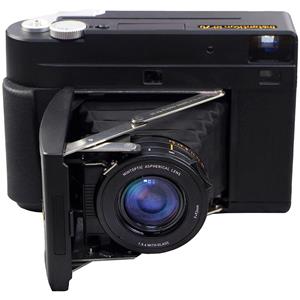 If you’re looking to upgrade your instant camera, check out these best accessories for your Polaroid photography.

These cameras work by exposing the light-sensitive area of ​​the film to whatever is in front of the lens, and then the camera ejects the exposed film. When ejected, the film passes through rollers spaced far enough apart to release the developing reagent stored under the white part of the film. In about 90 seconds, you have your image.

Since this process is instantaneous, there are definitely tradeoffs. Exposure is usually controlled by a light meter which measures the light from the location of the camera. It can be the same as the light hitting your subject. However, you can also be in the shade and your subject may be in daylight and your camera will think the scene is much darker than it actually is. The way to combat this is to decrease the exposure adjustment dial or change the setting to allow less light to reach the film. This varies depending on the camera you have. If the opposite is true – i.e. you are in a brightly lit area and your subject is much darker – then you would do the opposite and increase the exposure setting.

What you can expect

Details in your photos won’t be as sharp as digital cameras or analog film. It’s a decidedly lo-fi picture system, which is the beauty of it. If you’re looking for sharp, properly exposed photos with every shot, you’ll be deeply disappointed. However, if you’re willing to deal with the inconsistencies of Instant Film for the magic that happens when it comes out correctly, this can be something you really enjoy.

Below are some examples of Instax movies I shot in Iceland. When shooting in very cold or very hot conditions, care must be taken to ensure that the film develops properly. In the images below, I made sure to keep the camera out of the freezing cold as much as possible. And once the film was ejected, I quickly buried it deep in my clothes to allow it to develop at a constant temperature. Although FujiFilm’s Instax cameras handle both cold and hot temperatures decently, you still need to be careful.

When it comes to exposure, there are three factors that affect whether your photo will come out the way you want it to. It’s called the exposure triangle because it has three points. ISO is not changeable on insta cameras, film is rated at a specific ISO when it is made. The ISO for Polaroid film is 100 for SX-70 film and 640 for all their other formats. The ISO of FujiFilm Instax film is 800. Like standard analog roll film, the ISO is fixed. However, unlike film rolls, you cannot get a wide variety of different film speeds.

The next aspect of the exposure triangle is shutter speed. With Instax cameras, the shutter speed is fixed at 1/60and of a second. This means that to make exposure changes, the camera only needs to change the aperture. Other cameras will have some ability to adjust how long the light hits the film, but it’s not a very precise system. You often have the choice of the interior, which leaves more light on the film; cloudy, which closes the shutter faster than indoors; and bright, which is the fastest shutter speed. There are also a few new cameras that give you more precise control over shutter speed.

The last point of the exposure triangle is the aperture. The aperture of most instant cameras usually starts with a high number like f/8, which means that a lot of the frame is in focus. It also means that the camera requires a lot of light for good exposure. It’s also very difficult to get that shallow depth of field with such a small starting aperture. There’s usually not much you can do to control aperture except to make sure you’re choosing the right setting for your camera based on the light sensor.

If you have a camera with exposed rollers, you should always make sure to keep them clean. If there are debris, chemicals or particles on the rollers, it can impact film development.

Looking to incorporate a Polaroid camera into your studio setup? Watch this video.

How to take a better Polaroid Pictures

I’ve already mentioned a few ways to get better photos, like using the exposure compensation dial, learning to read your framing and adjusting it, and keeping your rollers clean.

The first and most important thing is to practice with a purpose. Take pictures, then analyze what you’ve done. Remember that there will be times when the results are beyond your control. Instant film is not an exact science like digital. It will give you unexpected results, both positive and negative.

If your camera has a flash, the biggest mistake people make is placing subjects too close to the camera. This will almost certainly result in a person appearing to be standing next to the sun. Another common flash mistake is not placing multiple people in the same shot of the flash. If you have someone close to the camera and another person in the background, that person will likely be much darker than those in the foreground. The flash works best a few meters from the camera, then its power drops significantly.

I’m talking about the chemical process of photo development. I tested a few ideas while the photos were developing. Here is what I learned:

Older Polaroid films were easier to handle. The protective layer used older materials that allowed the film to push and mark more. Although that doesn’t mean you can’t still do cool things with the film as it begins to develop. I tried two different things, applying heat and drawing on the developing film. See the results below.

Please note: Be very careful with some film modifications as the chemicals in the film can be toxic. Wear gloves if there is a risk of getting chemicals on your hands and be very careful when handling the film.

For the images below – both of which were shot on SX-70 film – I wanted to play around with the heat and how it would alter the image as the developer ran. I waited a minute after ejecting both images before applying heat. For the first, I used a pair of kitchen tongs and held the image above my stove. I did it slowly at first, then a little more intensely towards the end. You can see that the heat was a little too much because it distorted the frame as well as the image. You can’t really see it, but it actually led to such a cool 3D-like lift.

In the second photo, I used a lighter and applied it mainly to the sky, both from below and directly on the image. I think this version is much better. The sky was quite gray in reality and I think the heat turned the reagent blue on the first frame and turquoise on the second.

For this image I used Polaroid 600 film and decided to use a chopstick to write and draw on the image as it developed. You can see that I was able to write “hard core”. I also drew lines coming out of the headphones and made a series of dots to draw my hand. The hand outline didn’t work out really well, but the writing was clear enough. I also waited about a minute before starting the film to give it time to start working.

There are many cool things that can be done on Polaroids during their development and after. Treat yourself and have fun with it. Polaroid photography is a happy medium where you’re trying to get a good picture, but since so much is out of your hands, you’re also hoping for a little magic! 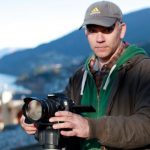 Alex DePew is a freelance cameraman/editor and photographer with over 18 years of experience behind a multitude of cameras. He has worked on projects all over the world and lived in beautiful New Zealand for 5 years where he worked on many high end commercials.