New Precure Movie Serves An Animated Short To Accompany It 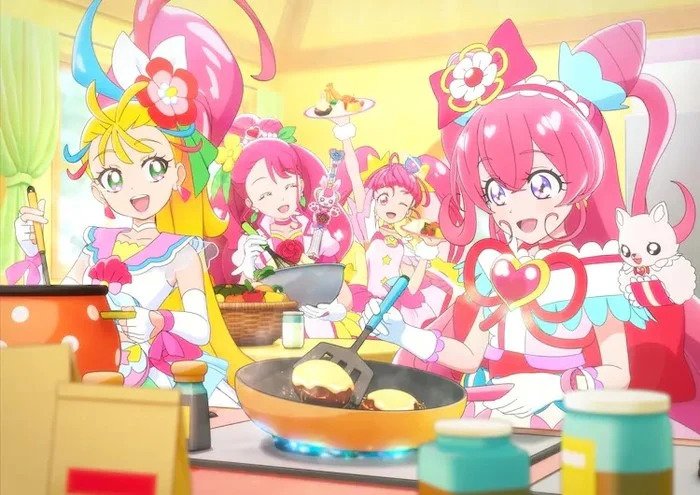 The film Delicious Party Precure The Movie: The Dreaming Kid’s Lunch (Eiga Delicious Party ♡ Precure Yume Miru ♡ Okosama Lunch in the original Japanese) hits theaters in Japan on September 23. But it turns out moviegoers are getting a little something extra. In addition to watching the film, they will be treated to a short animated film entitled My child’s lunch (Watashi dake no Oko-sama Lunch in Japanese).

Not much information has been released about the short. But we know it will have characters from Tropical-Red! Precure, Healin’ Good Precure, Star Twinkle Precureand Delicious Precure party. And we can only assume it will be very pink and cute.

The Delicious Party Precure The Movie: The Dreaming Kid’s Lunch the film is directed by Akifumi Zako, who previously worked on Hugtto! Precure. Credit for writing the script goes to Jin Tanaka, who is known in the Precure franchise to work on Eiga Mahō Tsukai Precure! Kiseki not Henshin! Heal Mofurun!and Star Twinkle Precure: Hoshi no Uta ni Omoi wo Komete. Hitomi Matsuura from Universe Precure Miracle works on both character design and chief animation director.

The musical composition is done by Shiho Terada. The film’s theme song is “Yōkoso, Okosama♡Dreamia” (translated as “Welcome to Childhood Reverie”) and is performed by Moeha Nochimoto.

The Delicious Party ♡ Precure the anime series is the 19th in the pretty and popular Precure animated series. It’s being streamed as a simulcast by Crunchyroll, and is also on Netflix, Hulu, and Amazon Prime Video, among others.

The story theme in the later part of the franchise is “Meals Bring Smiling Faces”. All the cooking comes from Cookingdom, but the Bundoru gang seem to have stolen the Recipe-Bon, where all the recipes are kept.

Would you be interested in seeing the anime short that accompanies the film?

Danica Davidson is the author of the bestselling manga art for beginners with artist Melanie Westin, plus her suite, Manga art for everyoneand the first manga chalk book of its kind Manga Art Chalk, both illustrated by professional Japanese mangaka Rena Saiya. Check out his other comics and books at www.danicadavidson.com.